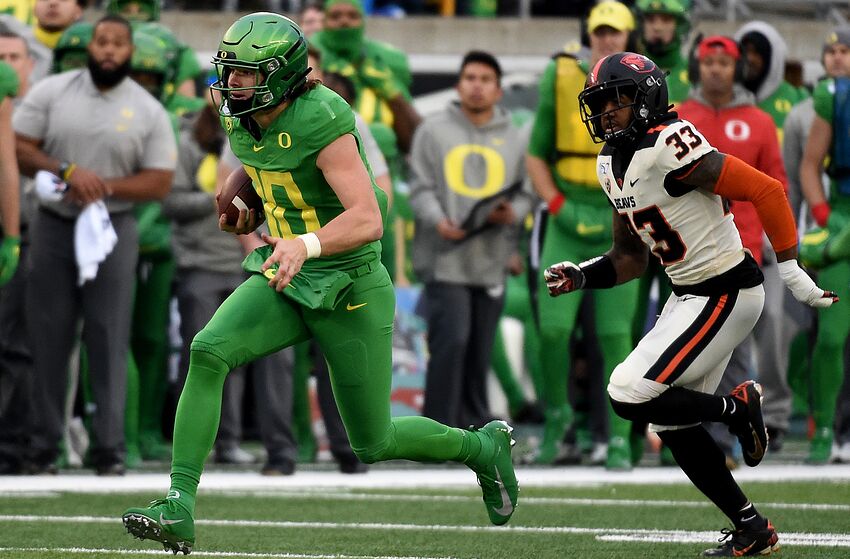 EUGENE, OREGON - NOVEMBER 30: Quarterback Justin Herbert #10 of the Oregon Ducks runs with the ball as defensive back Jalen Moore #33 of the Oregon State Beavers closes in during the second half of the game at Autzen Stadium on November 30, 2019 in Eugene, Oregon. Oregon won the game 24-10. (Photo by Steve Dykes/Getty Images)

Despite not being well-liked by some of the fanbase, Marcus Arroyo has grown with Oregon Football over the last few years and now has an opportunity.

Earlier this week, Arroyo was hired by UNLV. He will have the chance to hone his offense further with a program that has a solid reputation along with an NFL type facility that will certainly help with recruiting. Now is a good time for Arroyo to make the move. The transition should be smooth for both Oregon and UNLV. The Ducks are starting next season with a different quarterback as Justin Herbert heads to the National Football League.

Oregon Football Head Coach Mario Cristobal now has the option to pick an Offensive Coordinator to fit his offensive style. Arroyo was hired by Willie Taggart before his first season with the team, similar to Cristobal. While there are some options out there now for Cristobal, more may come as bowl season comes to an end. This is a decision that shouldn’t be rushed.

While Aroyo is unproven at the Head Coaching level, he is among one of the top recruiters in the country. I expect this will play a big role in his first few seasons. Arroyo follows Tony Sanchez who was Head Coach for 5 seasons and was fired before Thanksgiving posting a 20-40 record. A former Oregon Duck has endorsed the move as well.

Crosby texted his approval shortly after the hire, ““It is no secret that the Rebels have had (their) misfortunes, However, I believe Coach Arroyo is going to be the perfect fit to lead the Rebels into success.” Tyrell Crosby has played in 23 games for the Detroit Lions in his career after playing a key role with Oregon Football.

Marcus Arroyo landed in Las Vegas yesterday and has a lot of work ahead of him. It is not known if he will coach for Oregon Football in the Rose Bowl vs Wisconsin on New Year’s Day.